The Cosmos Ecosystem is constantly expanding, with more projects entering the exciting world of IBC. This is good news for all Cosmonauts and the future of the crypto industry, as we continue to improve, develop, and create more utility for the entire ecosystem.

However, this also means that it can become quite overwhelming for those who are new to the space.

In order to acquire more in-depth knowledge and a better overall understanding of the Cosmos ecosystem, we’ve developed a report that will further explore key staking statistics. With this information, users will have an easier time finding the right project/chain to support and stake their assets with. 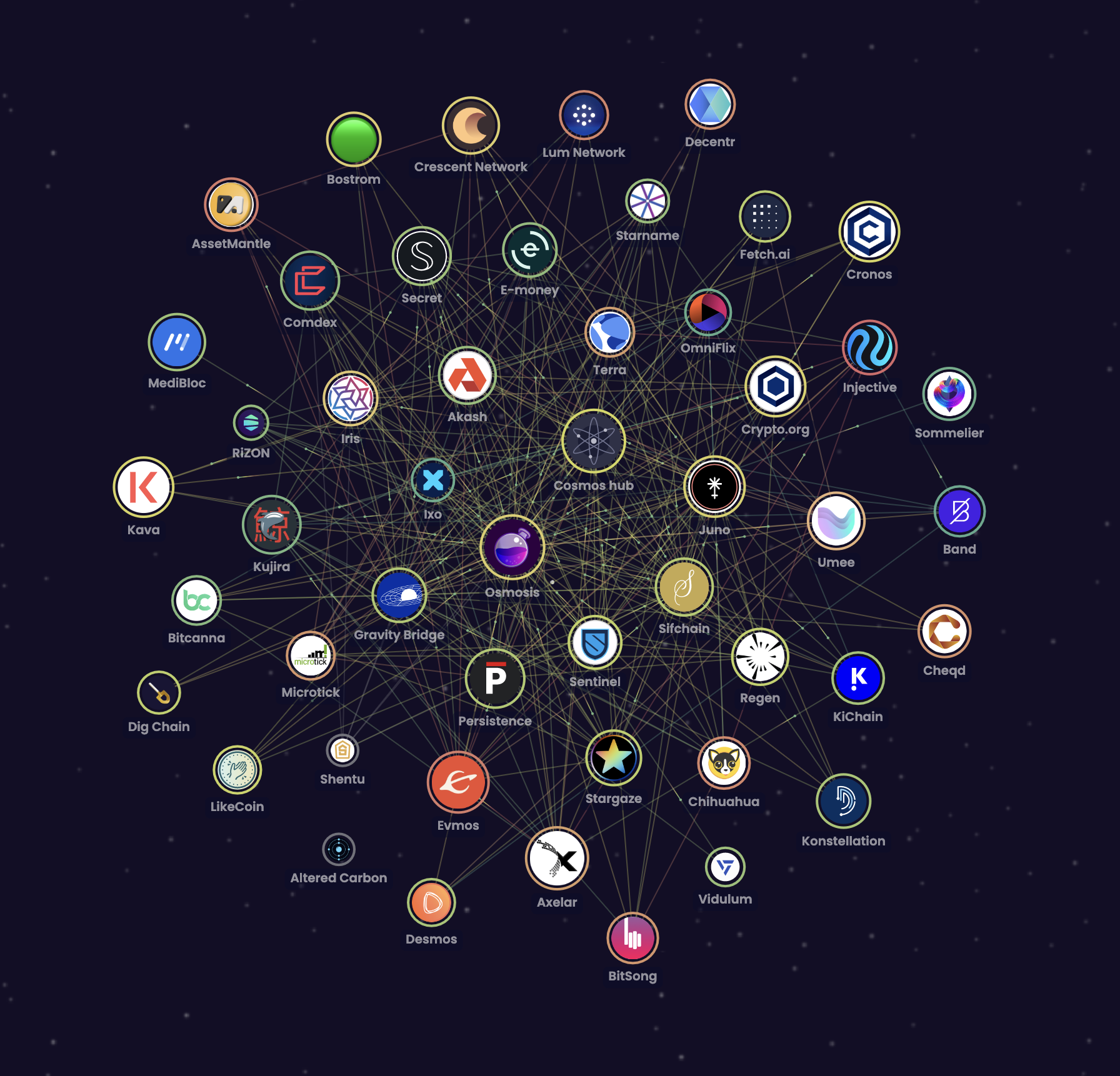 With 48 active chains within the Cosmos Ecosystem, there are plenty to choose from and each has its own respective features and utility. We’ve selected 10 chains based on the highest staked marketcap (Marketcap / Staked Value) to base our research on (as seen below). 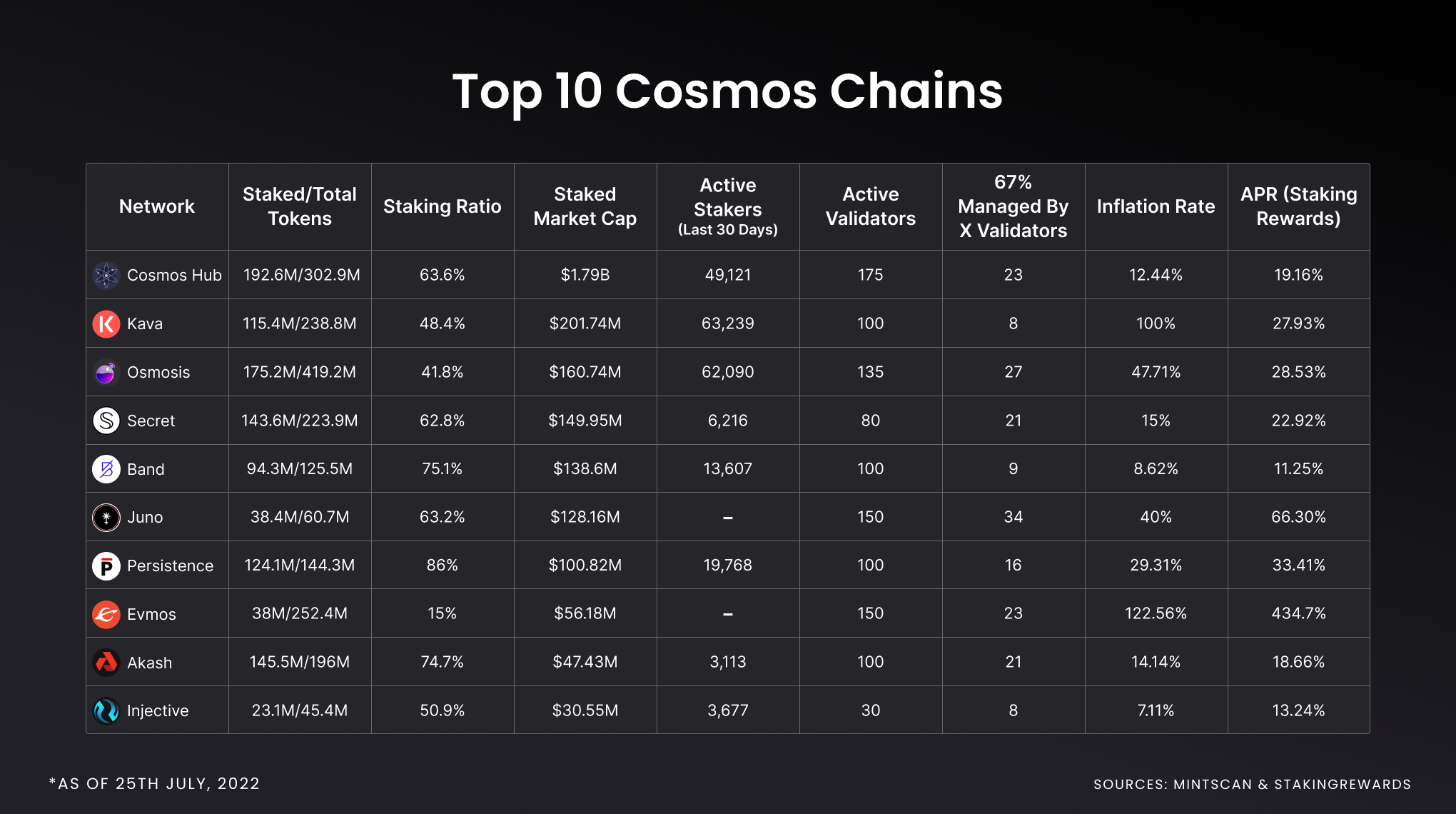 Cosmos Hub is an ever-expanding ecosystem of blockchains of interconnected apps and services, built for a decentralized future that can scale and interoperate with each other. Before Cosmos Hub, blockchains were siloed and unable to communicate. In addition, they were hard to build and could only handle a small number of transactions per second. Cosmos Hub solves these problems with an entirely new technical vision.

Kava is a layer-1 blockchain featuring a developer-optimized co-chain architecture that combines the two most used permissionless ecosystems (Ethereum and Cosmos) into a single scalable network. Its co-chains combine the flexibility and speed of Ethereum smart contract development with the interoperability of the Cosmos SDK in a single network, all powered by the ultra-fast Tendermint consensus engine.

Osmosis is an AMM (Automated Market Maker) protocol that allows developers to create applications with sovereign liquidity pools. It was built using the Cosmos SDK and makes use of IBC (Inter-Blockchain Communication) to facilitate cross-chain transactions. In other words, Osmosis is a DEX (decentralized exchange) designed particularly for Cosmos, with the intention to spread to other blockchains in the future.

Band Protocol tackles the problem of having access to trusted data and services over the traditional Web 2 space for any dApp by building a decentralized bridge, enabling secure interoperability between smart contracts and the traditional web.

Juno is a layer 1 smart contract network that aims to solve first-generation smart contract bottlenecks, which are limited scalability and high deployment costs for deployment and execution. The network offers a seamless and simple environment for developers across the globe to efficiently deploy scalable, secure dApps.

Persistence is a Tendermint-based specialised layer-1 focused on creating use-cases around liquid staked assets. It’s aiming to become the liquid staking hub for the PoS (Proof-of-Stake) economy, facilitating the issuance and deployment of liquid-staked stkASSETs in the DeFi ecosystem to allow users to earn staking rewards while simultaneously participating in DeFi primitives.

Evmos is a scalable PoS blockchain with a high throughput that’s EVM-compatible and IBC-enabled. It’s primarily designed to funnel Ethereum applications into the vast Cosmos ecosystem to benefit both users and developers to make the blockchain simpler to use.

Injective Protocol is an Ethereum-compatible, front-running resistant, and completely decentralized cross-chain protocol. It not only supports existing Ethereum users but also is intended to help connect users from various blockchain networks together into a single crypto community. The interoperable backbone that powers Injective Protocol enables cross-chain interactions between sovereign blockchains.

The below graph highlights the total staked value (in millions of dollars) of PoS assets on each respective network: 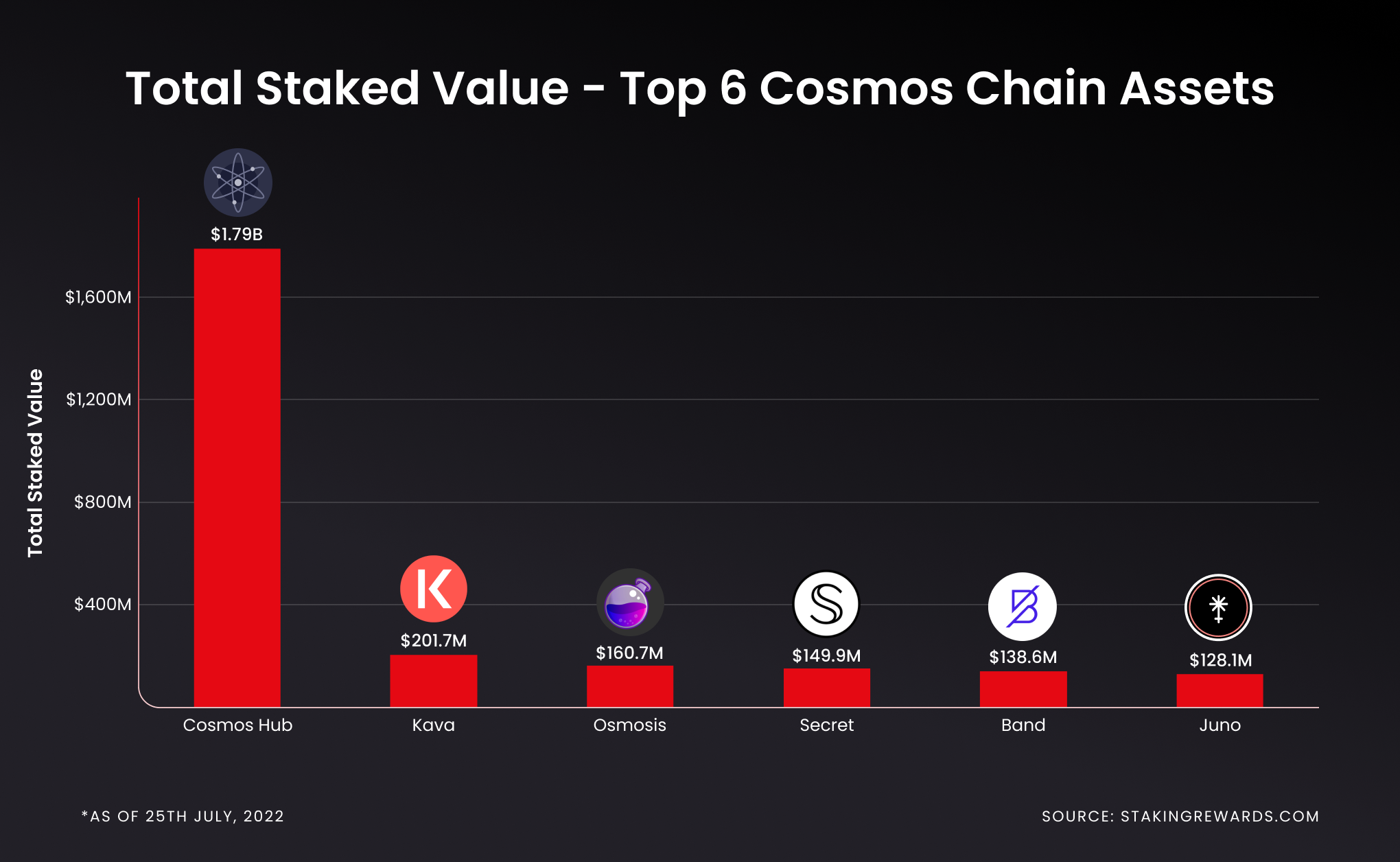 Cosmos Hub is the clear frontrunner based on its staked value, with over $1.79B worth of $ATOM staked on-chain. Kava is next in line with $201M in staked value, followed by Osmosis, Secret Network, Band Protocol, and Juno

Although the previous data points paint an important picture, the value of staked assets isn’t the most important metric to determine a chain’s security. In order to better understand how secure a chain is, the staking ratio is the most valuable metrics (# staked tokens in comparison to the total circulating supply). 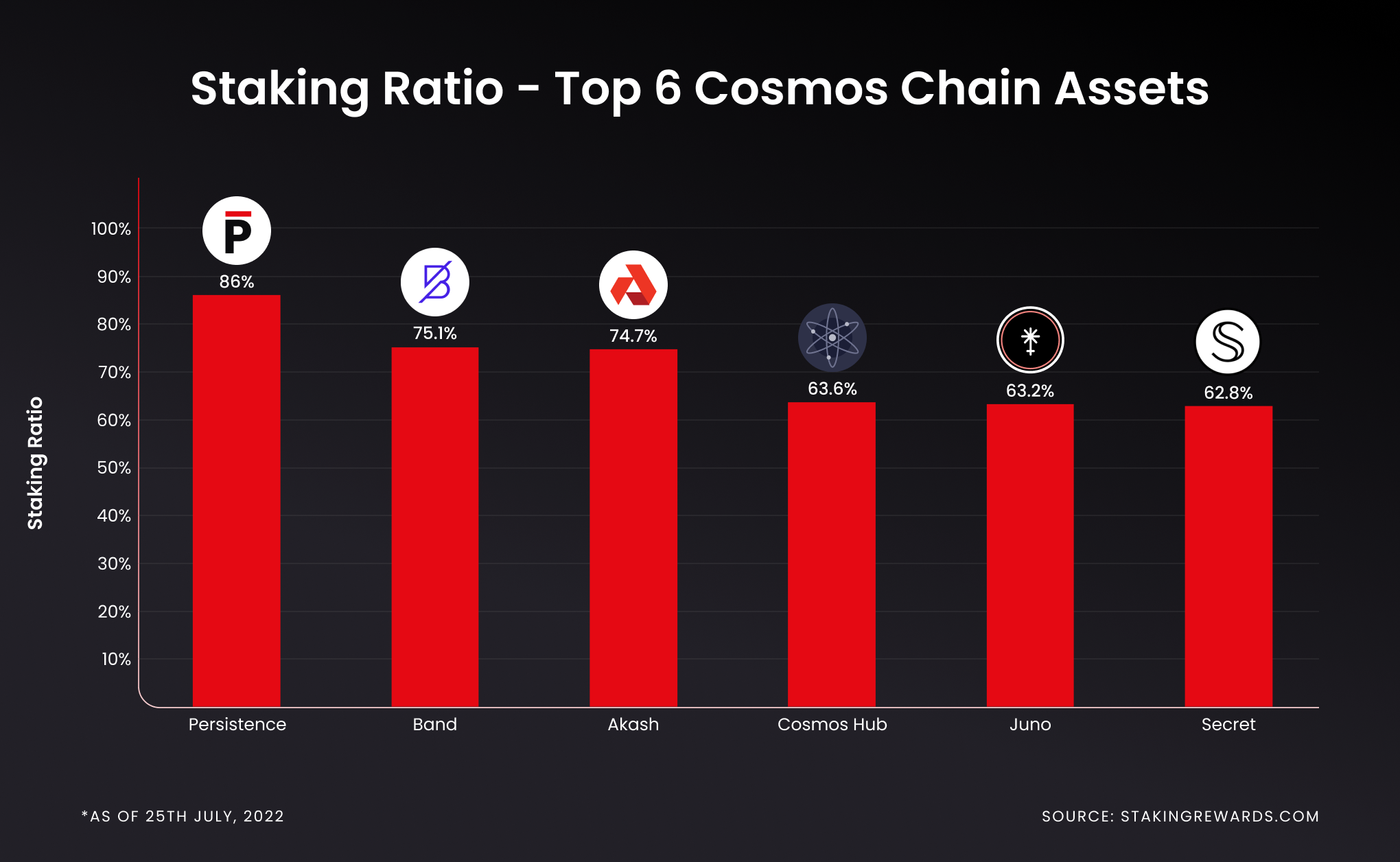 When looking at a chain’s staking ratio, the rankings completely change. Based on the above chart, Persistence is now the leader, boasting a staking ratio of 86% of its $XPRT token. It’s then followed by Band Protocol, Akash Network, Cosmos Hub, Juno and Secret. Considering a the same token price, the higher a network’s staking ratio, the more secure it becomes.

The more users that stake, the smaller their rewards will be (given the same amount of inflation). However, with higher inflation, the total amount of rewards distributed will be larger, and therefore the portion received will be higher.

The inflation rate will also change much slower than the staking rewards rate does.

Now how are they correlated? Staking rewards = inflation rate / staking ratio
(Except for Osmosis, where a part of the inflation rate goes to LP rewards)

The chains with currently the highest inflation rate are: 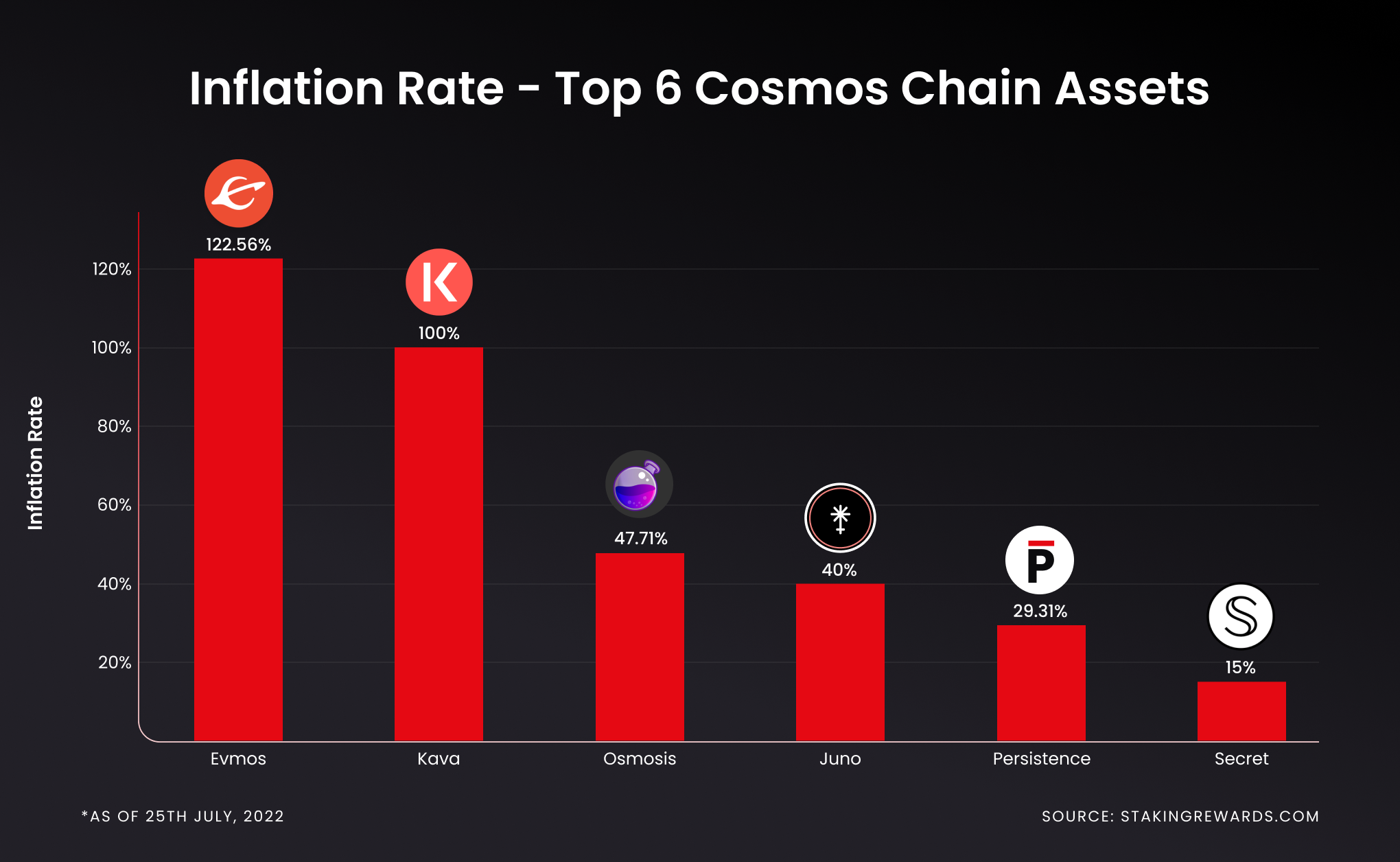 Evmos sits at number 1 with an inflation rate of 122,56%, followed by Kava at 100%. For Kava, this means that the same amount of tokens will be minted as there are currently - the tokens in circulation will also be doubled. Osmosis is in the third position with under 50%, then comes Juno with 40%, Persistence with around 30%, and Secret Network with an inflation rate of 15%.

When looking at the highest staking rewards, we get a different ranking distribution: 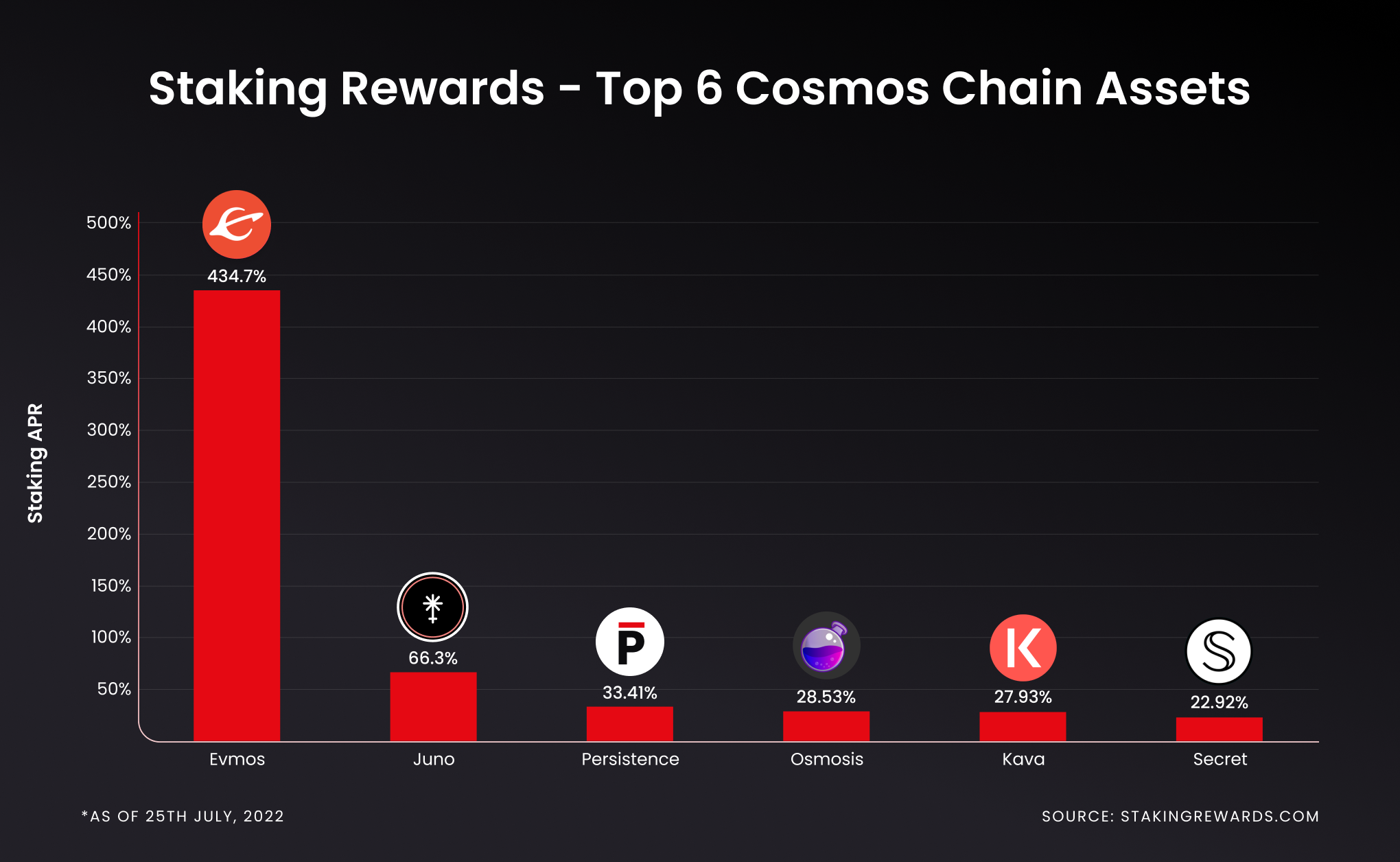 Evmos currently offers the highest staking rewards with more than 430%, followed by Juno with 66.3%, Persistence with ~34%, and Osmosis, Kava and Secret Network following.

The active number of stakers indicates how many native token holders have staked their assets on the respective networks and includes both new and current stakers. 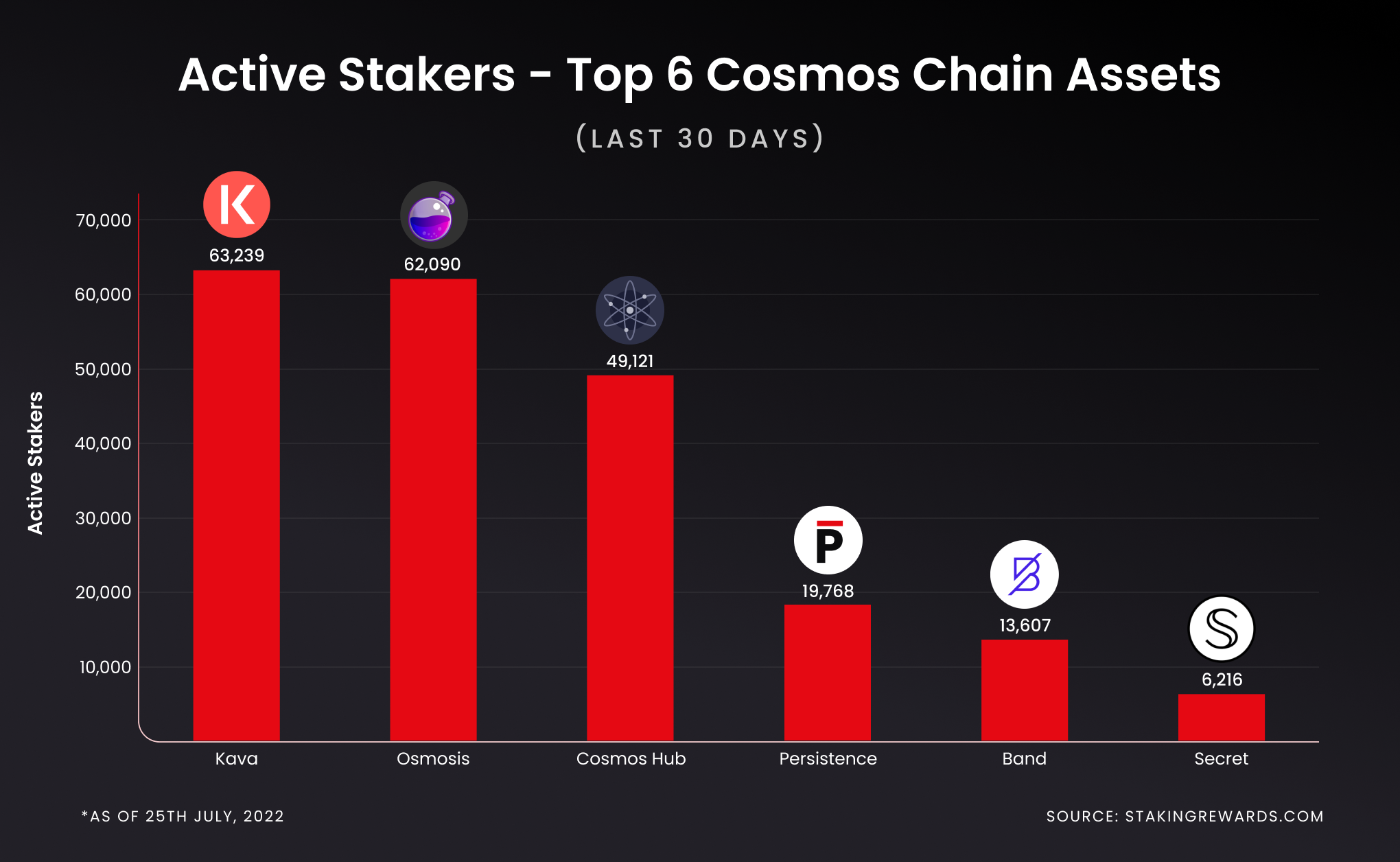 To see how truly decentralized a network is, we can take a look at some important metrics. The first is to view how many validators are active on the chain. 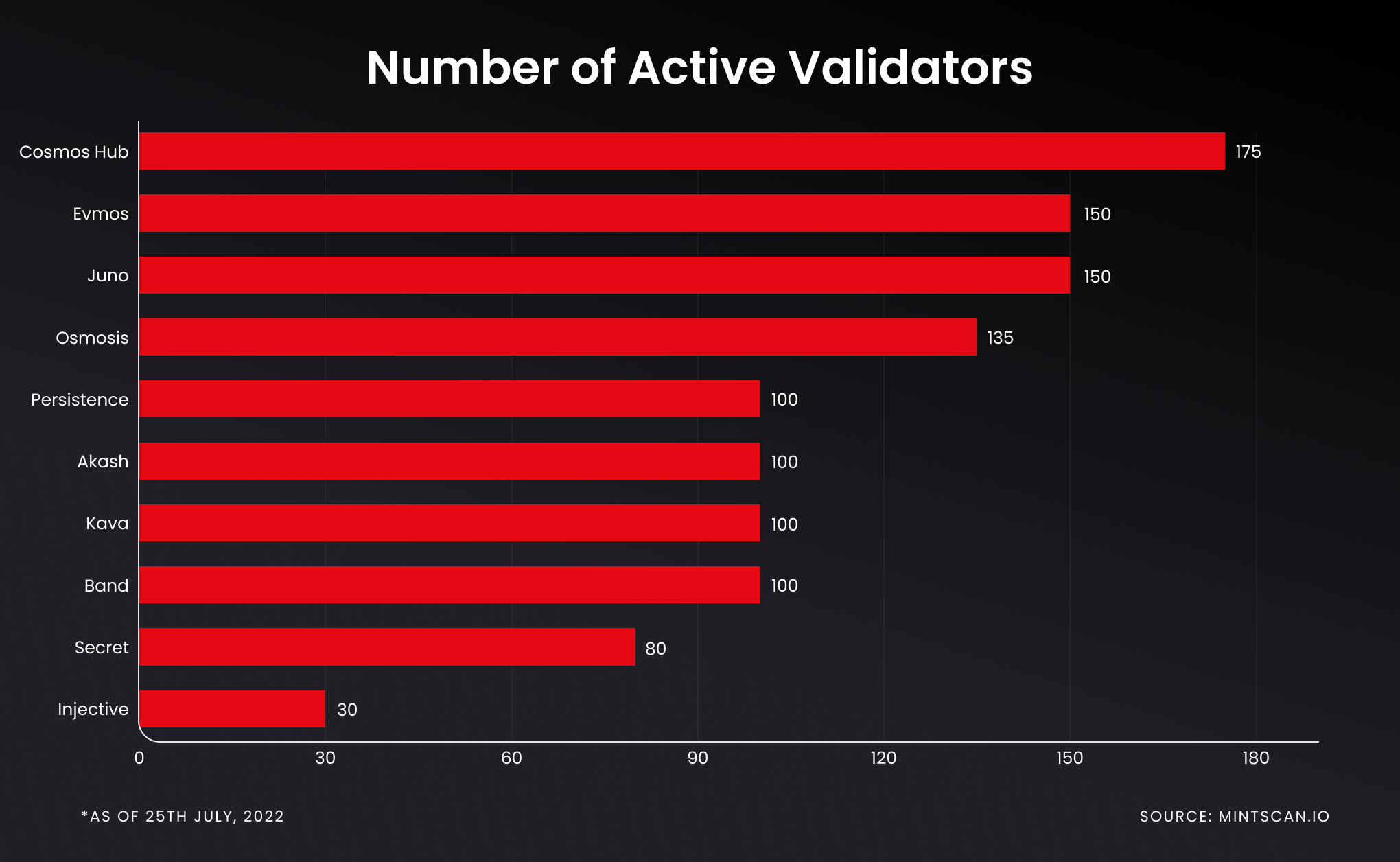 The bigger the active validator set, the more decentralized it makes the network, as delegations will be spread over a larger amount of different validators.

But how decentralized a network really is can be determined by how many validators have a combined voting power of 67%. The more equal the delegation is spread across the validator set, the more decentralized the network becomes. 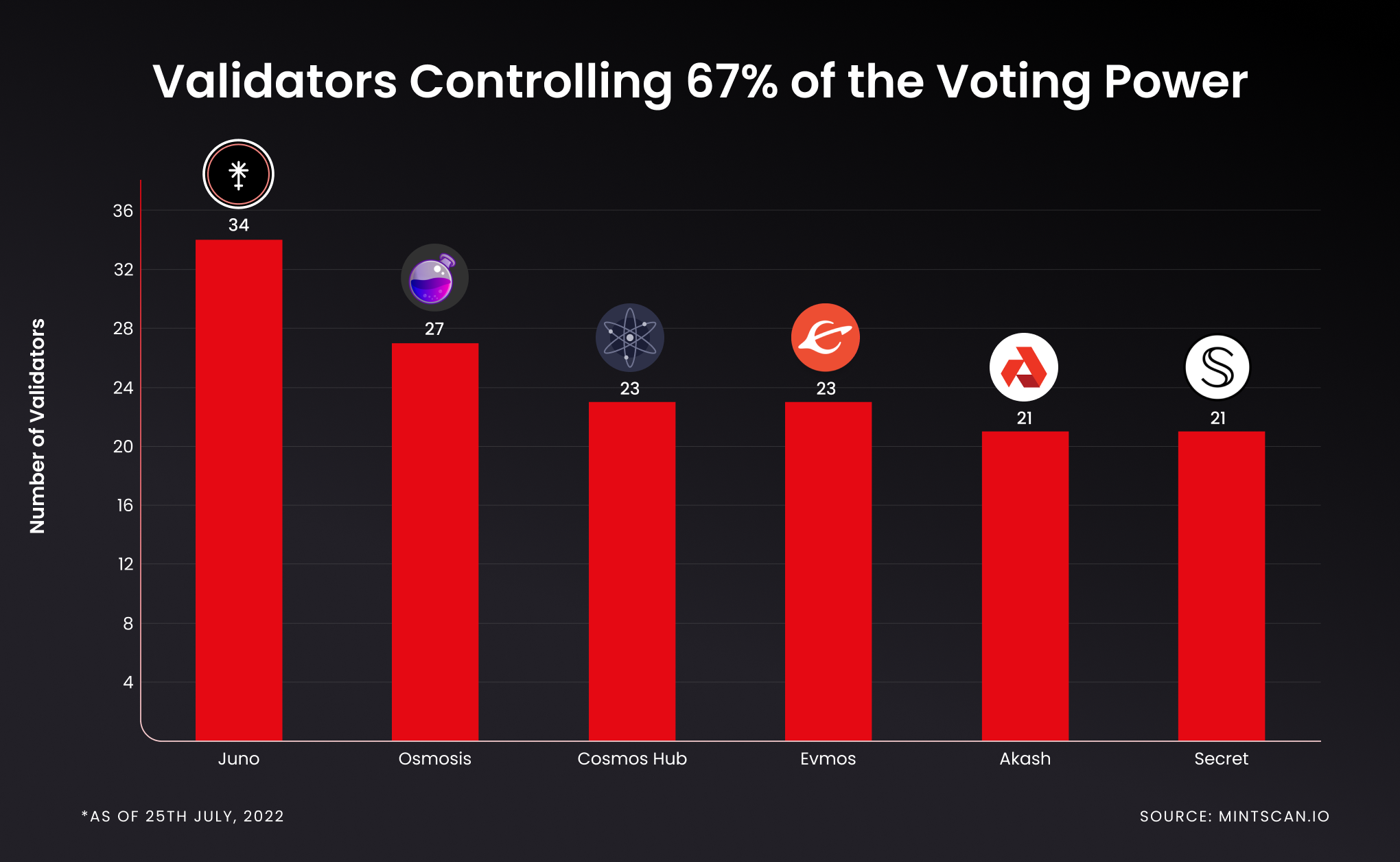 In the above chart, we can see that Juno has the highest score with a voting power of more than 67% being distributed across 34 different validators - this indicates that Juno is a very decentralized chain. Others that are highly decentralized (based on this criteria) are Osmosis, Cosmos and Evmos. Akash Network and Secret Network follow but are almost at a distribution of half the number of validators as Juno.

When we look at any network in the Cosmos Ecosystem, there is a lot more than market cap alone. It is important to keep an eye on metrics like staking ratio, distributed voting power and how many validators are in the active set. And when you look for the highest return, you should understand the difference and the correlation between staking rewards and inflation rate.