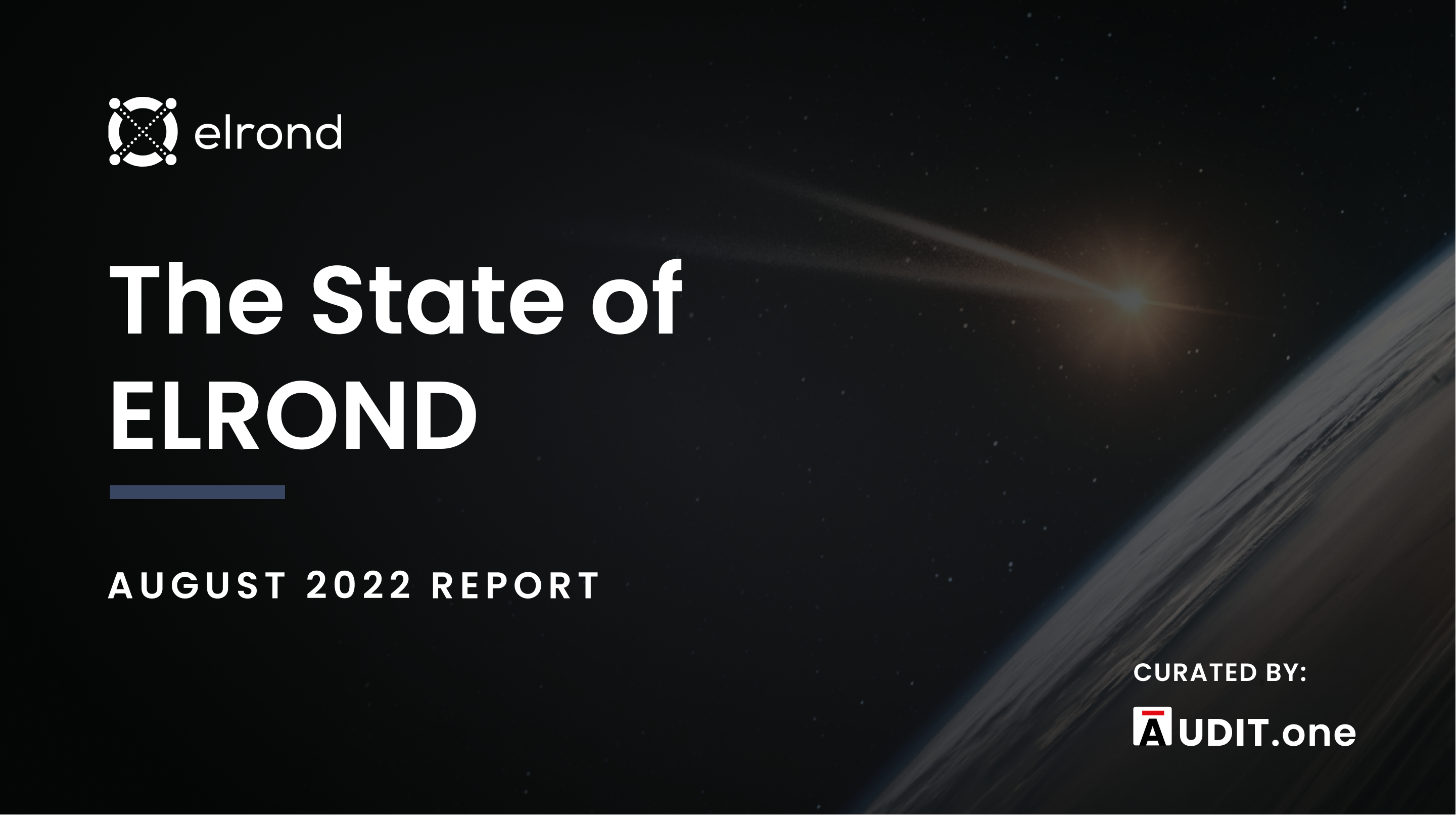 Elrond is a protocol that is focused on providing security, efficiency, scalability, and interoperability. By implementing a unique sharding technique, Elrond’s performance can scale up with the number of computers joining the network, reaching more than 100.000 transactions per second while becoming more and more decentralized as they grow.

Following the Proof-of-Stake principles, the Elrond network organizes time into rounds and epochs, where a fixed number of consecutive rounds form an epoch.

The Elrond network is one of the pioneers to present a viable solution to the so called scalability trilemma with a huge improvement in blockchain speed, scale, cost, and user experience.

Part of this solution comes from its Adaptive State Sharding, where all the three types of sharding (network sharding, transaction sharding and state sharding) are implemented at once. Combined with its “adaptive” component, this novel architecture allows for dynamic network configuration to maintain a high level of security while scaling with demand.

In addition to scaling through sharding, Elrond also approaches the consensus problem with a mechanism called Secure Proof of Stake, which mitigates potential attack vectors when compared to Proof of Work, while also enabling large throughput and fast execution.

It’s by solving some of the hardest consensus and sharding problems in the blockchain space, that Elrond is able to provide a very high level of performance on a network made of inexpensive computers, resulting in a very low cost per transaction.

As more and more projects build their applications on the Elrond network, the Ecosystem around Elrond is rapidly expanding. It goes from DeFi applications to gaming and even real-life projects.

Here are some of the highlights:

Maiar is Elrond’s digital non-custodial wallet that runs on every mobile phone. The non-custodial feature of the wallet and the smooth UX makes the registration process more straightforward and effortless, even for beginners. Maiar uses progressive security to minimize the onboarding friction which allows you to create a wallet using only your phone number.

Maiar offers a digital identity layer that starts with a service mapping the phone number to a wallet address while preserving privacy and allowing users to send money to friends and family via their address book.

If you rather not share your phone number, special usernames called ‘Herotags’ can be provided through a DNS service deployed on Elrond Network. The approach of progressive security makes sure that the more you use the app, the more sophisticated security features are triggered, to help you stay safe and your assets secure.

Maiar also provides a decentralized exchange built on the Elrond blockchain. This exchange allows users to trade, swap, farm, and provide liquidity for digital assets and cryptocurrencies. The Maiar exchange supports 19 assets, including their own native token (MEX), and 11 on Jungle which is the complementary DEX product that allows automated and permissionless token listings. On top of that it includes an analytics section for additional information including price charts, volume charts, and more.

This is Elrond’s token bridge that enables assets to flow freely between Elrond and Ethereum, and soon other EVM compatible blockchains.

The portal has a security-first design using audited smart contracts and has been publicly battle tested, to ensure that all scenarios are comprehensively explored and validated. They work together with strategic infrastructure partners to ensure a decentralized, transparent and highly available passage for assets flowing through the bridge.

In January this year, Elrond has acquired the crypto payments service provider Utrust. With this acquisition they aim for two major things: To make payments faster, cheaper and more secure by using internet-scale blockchain technology. And to transform payment processing services from a cost for merchants into an income stream. Together with the Utrust team they intend to revolutionize e-commerce and payments.

Utrust is the leading cryptocurrency payment solution designed to modernize the financial and payments industry and solve the problems of traditional payment methods by enabling immediate transactions, buyer protection, and instant settlements for merchants.

Earlier this year, the National Bank of Romania has officially approved Elronds acquisition of the e-money institution TwisPay. TwisPay it is a financial institution licensed to provide payment services and to issue electronic money in accordance with the legislation in force and with the authorization received from the National Bank of Romania. Apart from that it is a principal member of Visa and of MasterCard.

E-money has been designed as a digital alternative to cash for automating financial transactions in areas such as payments and e-commerce. Elrond seeks to enhance the utility and take it to its natural conclusion by complementing it with a blockchain technology that is fast, scalable and inexpensive.

This puts Elrond in a strategic position to offer a sustainable infrastructure for a completely new payment rails that is faster, cheaper, transparent, and open to people all around the world.

Besides all that, there is a huge NFT ecosystem that is emerging on Elrond, with tons of projects, marketplaces, tools and even gaming. 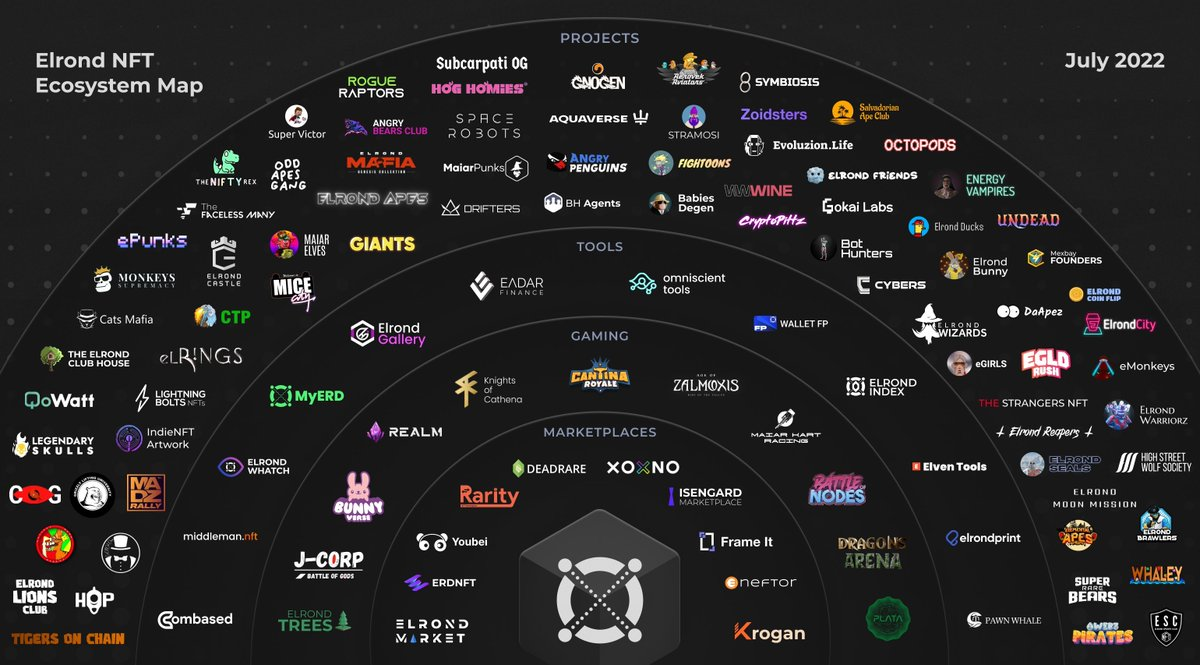 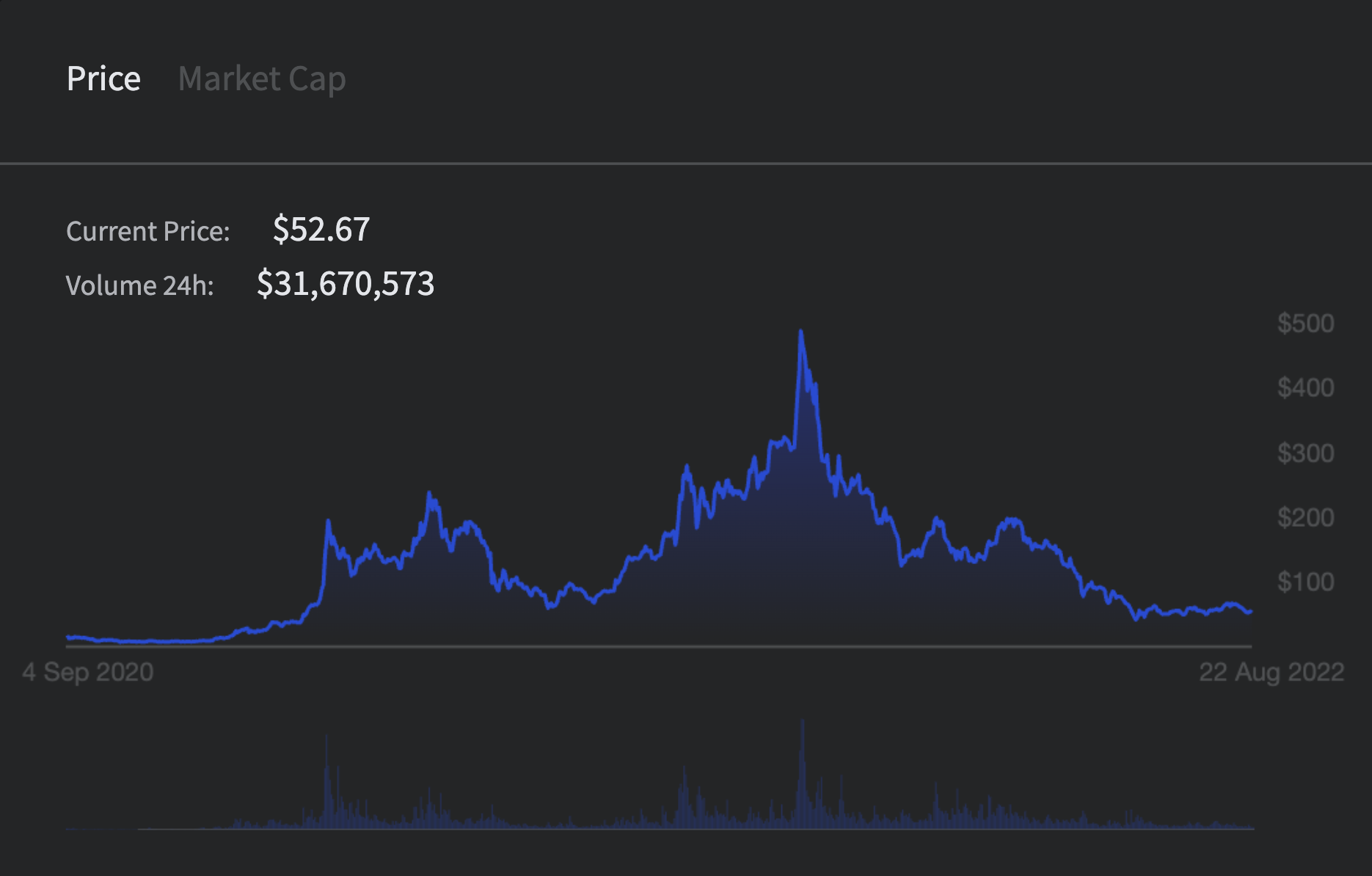 $EGLD or ‘eGold’ is the native token of the Elrond Network. Just like many crypto currencies, $EGLD had its glory days around the end of 2021 with an all time high of $542.58. Current market conditions have forced the price down between $50 and $70 dollars at the moment. 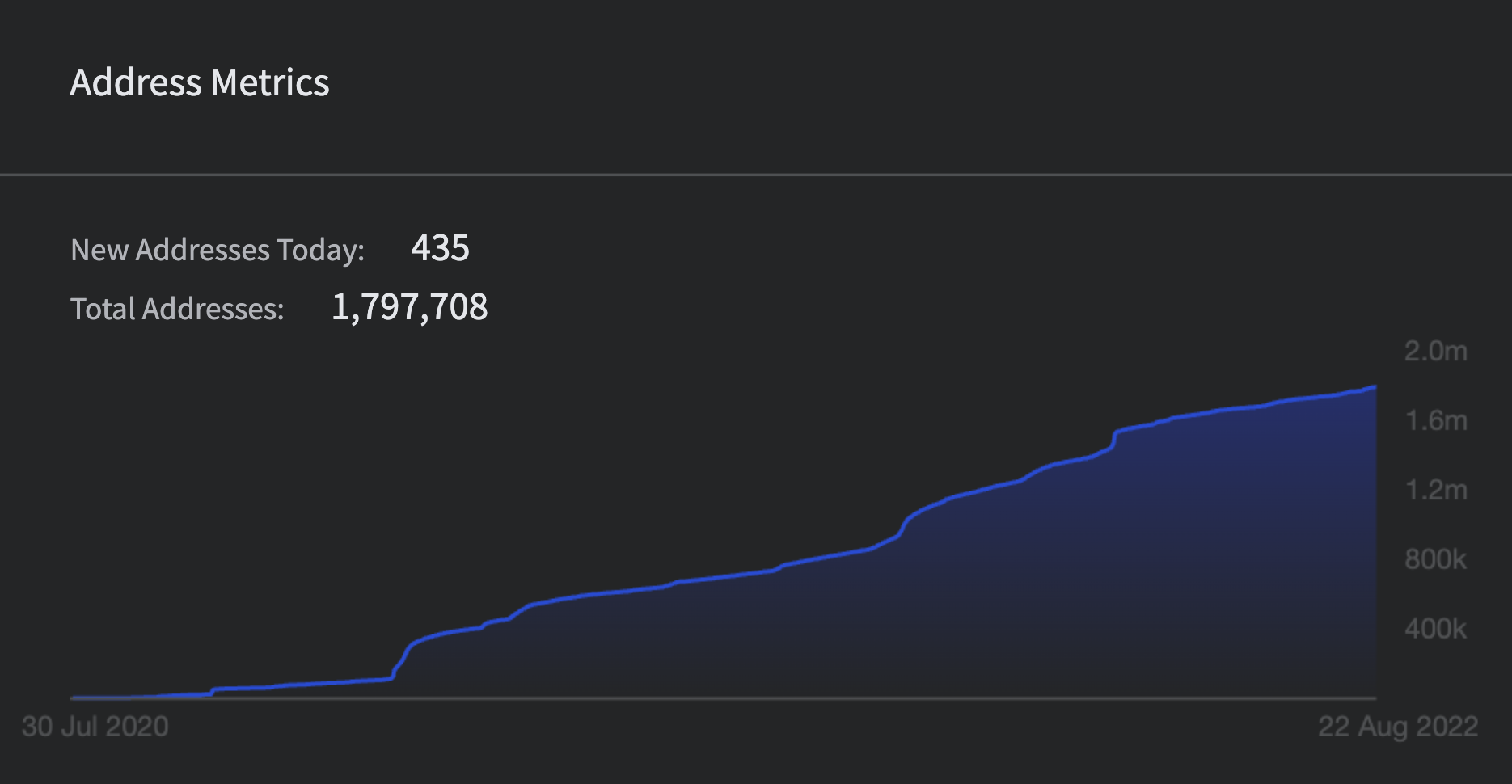 As you can see in the graph above, Elrond has seen a steady growth in unique addresses over the past 2 years. At this rate it is possible that the number of addresses will surpass 2 million by the end of 2022. 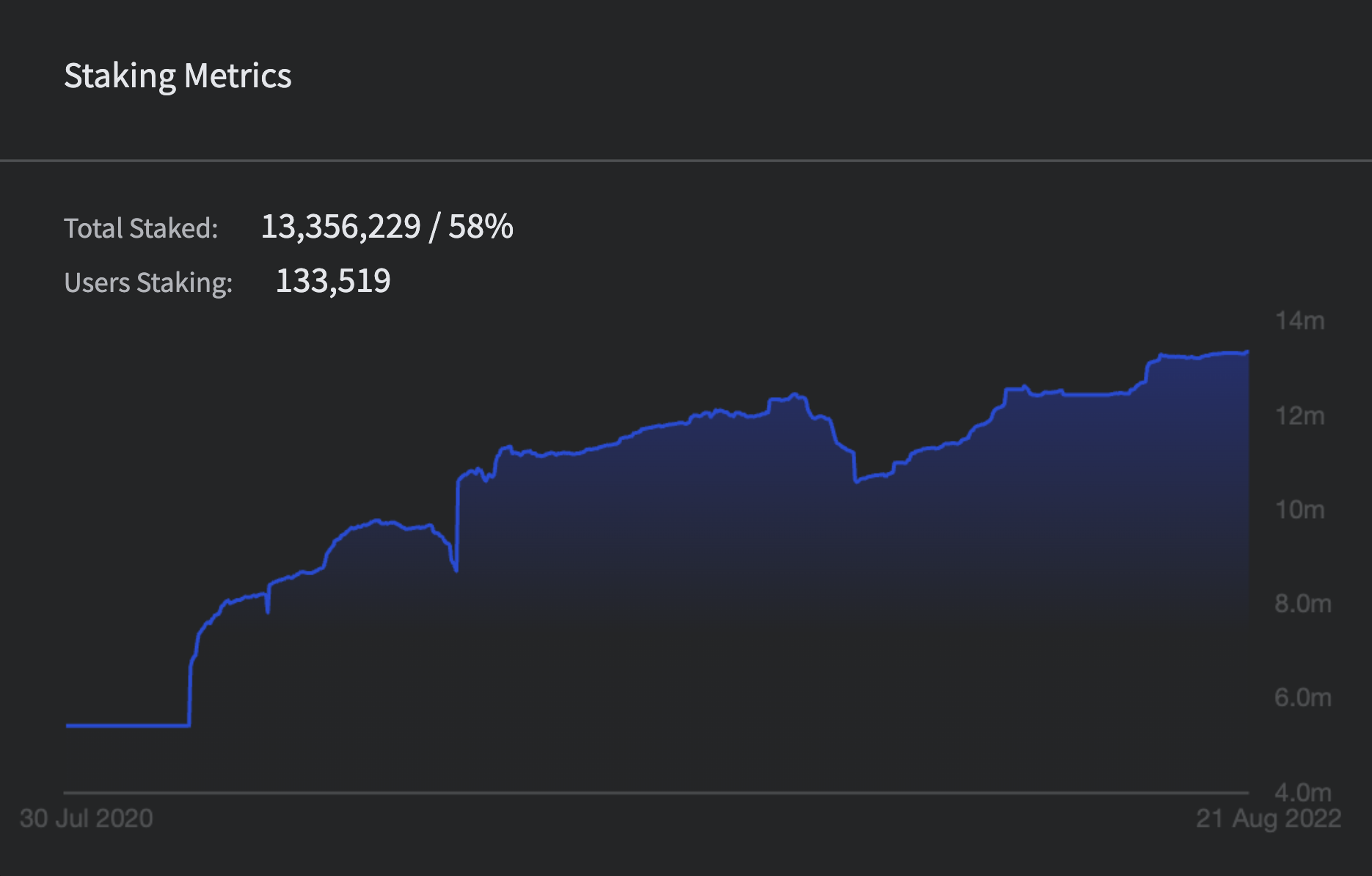 Just like the number of addresses we can more or less observe a steady growth of the staking ratio, which is very positive for the security of the network. There was a fallback around December last year, but this has already been recovered completely.

About 13,356,229 tokens or almost 58,5% of the total supply is being staked at this moment and distributed over an active set of 379 unique validators. Meaning that more than half of the tokens are used to make the network more secure and thanks to Elrond sharding approach, these are widely scattered over a large group of validator nodes which in its turn benefits decentralization.

Although stakers have many providers to choose from to delegate their $EGLD, 67% of all voting power lies with the top 21 validators. If we look at the number of possible validators there are, this seems low, but it’s actually pretty good compared to the top networks in the Cosmos Ecosystem.

Together with the fact that after each epoch the set of validators is completely shuffled by randomly distributing them into shards, we can say that they have an increased network security.

With these numbers we can only conclude that user adoption of the Elrond Network is growing stronger. The need for scalability drives more people and businesses towards Elrond’s advanced sharding technology, which allows transactions to be processed at a faster rate than on other platforms.

Together with the strong team that is behind Elrond, we definitely believe that they will play an important role in the future of crypto.